The Most Successful Cowboy Hero From The Golden Age of Hollywood

In 1935 the first Hopalong Cassidy film was produced by Paramount Pictures starring a 40-year-old actor named William Boyd. Over the next 20 years, Hopalong Cassidy and Boyd became an iconic fixture in the lives of American movie goers, particularly young people who joined his fan club and collected his merchandise in record numbers. The Hoppy Creed of behavior is as relevant today as it was when Hoppy and his white horse, Topper, paraded across America. During that span, 66 original movies were made along with 52 television episodes, 104 radio shows and hundreds of comic books; a library and collection that has been preserved in pristine condition and been identified by the film archivist of the Library of Congress. The entire collection of film, digital, and collectible merchandise is owned and managed by U.S. Televison Office, Inc. which acquired the property from Boyd’s widow, Grace.

In 2020, 100 years after Bill Boyd first worked in Hollywood as a bit actor, the character and stories of this legendary lawman are still being enjoyed by viewers on STARZ, ME-TV, Amazon and on DVD. These licenses, along with timeless merchandise, have built a solid foundation to relaunch the Hopalong Cassidy brand as Hoppy Rides Again.

Hopalong Cassidy watches outsold Mickey Mouse watches 3 to 1 in 1952.
Under Bill Boyd’s guidance, Hopalong Cassidy grossed over $70mm in merchandise that same year.
From Hollywood’s Western past, Hopalong Cassidy Rides Again is the return of the famous
lawman and role model to the forefront of cowboy Western entertainment.

Hopalong Cassidy is a fictional cowboy hero created in 1904 by the author Clarence E. Mulford. The character as played by movie... 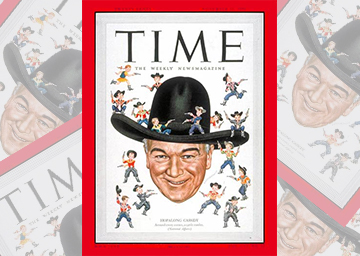 THE HOPALONG CASSIDY FILM COLLECTION Includes over 4,000 reels of 35mm and 16mm film, of both positive and negative prints... 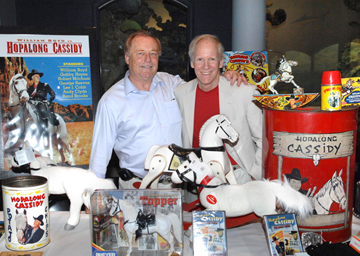 The Hoppy Trading Post is actually 2 “virtual” stores in one. The Museum Store offers original collectible items that will be sold by...

USTO has preserved and enhanced the films and digital assets and licenses, and copyrighted the 66 original movies, 52 Original TV Episodes, 104 Radio Shows, 200 Comic Books, and over 2,400 different Merchandise Licenses over the history of the century-old brand.